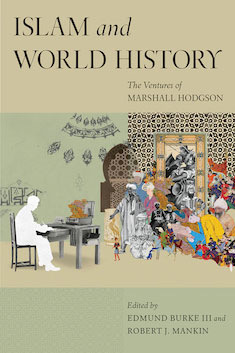 Published in 1974, Marshall Hodgson’s The Venture of Islam was a watershed moment in the study of Islam. By locating the history of Islamic societies in a global perspective, Hodgson challenged the orientalist paradigms that had stunted the development of Islamic studies and provided an alternative approach to world history. Edited by Edmund Burke III and Robert Mankin, Islam and World History explores the complexity of Hodgson’s thought, the daring of his ideas, and the global context of his world historical insights into, among other themes, Islam and world history, gender in Islam, and the problem of Muslim universality.

In our post-9/11 world, Hodgson’s historical vision and moral engagement have never been more relevant. A towering achievement, Islam and World History will prove to be the definitive statement on Hodgson’s relevance in the twenty-first century and will introduce his influential work to a new generation of readers.

3. From Gibbon to Hodgson and Back

4. Hodgson, Islam, and World History in the Modern Age

Hodgson and the New World History
by Christopher A. Bayly

5. The Invention of World History from the Spirit of Nonviolent Resistance

Hodgson and the New Islamic Studies
by Pamela Kyle Crossley

8. Harems and Cathedrals: The Question of Gender and Sexuality in the Work of Marshall Hodgson

9. The Problem of Muslim Universality